We carry out the anti-alcohol interference experiment and the life experiment in a targeted manner. It is in the air-conditioning mode and the simulated scenario experiment. The results show that the new electrolyte and anti-interference catalyst formulation optimized and designed can effectively improve two aspects.  1. The long-term working stability and working life of the sensor. 2. The anti-interference ability of the formaldehyde sensor to deal with external environmental gas pollution sources. This research plays an important role in broadening the application of electrochemical formaldehyde sensors in the field of home appliances.

In recent years, the Internet is developing and people pay more attention to air. The demand for sensors in smart homes, vehicle equipment, smart mobile terminals and other fields is increasing day by day. However, the working life and long-term stability of electrochemical formaldehyde sensors are the main obstacles that restrict their popularization and application in the field of home appliances. The sensor has a short life and long-term response to external environmental performance degradation. This often results in inaccurate detection results and false alarms in the detection system. And it further restricts the wide application of sensors in various fields. The long-term stability of electrolyte materials and catalysts is one of the bottlenecks restricting the application of formaldehyde sensors.

Therefore, we develop a long-term formaldehyde sensor. And we further carry out simulated scene experimental analysis and long-term work stability research. They are based on the optimized design of the new electrolyte and anti-interference catalyst formulation. The experimental results show that the new electrolyte and anti-interference catalyst formulation can effectively improve two aspects. 1. The sensor’s resistance to damage and interference caused by  high temperatures, high humidity, high concentration etc.  2. The long-term working stability of the formaldehyde sensor. This research has a positive effect on broadening the application of formaldehyde sensors in the field of home appliances.

The formaldehyde sensor used in this experiment is an electrochemical sensor element. First, the acid-base electrolyte commonly used in the industry replaces the self-developed new electrolyte . At the same time, we spray the self-developed anti-poisoning catalyst formula slurry on the surface of the new electrolyte membrane. This is to make the sensor electrode. And then assemble the cover body, support sheet, electrode, dust-proof breathable film, signal lead-out PCB board and metal leads. After that, the fabricated sensor gets older for 1 month under specific working conditions. Among them, the anti-interference catalyst slurry formulation mainly includes four kinds. 1. Platinum powder. 2.Nano-carbon. 3.An appropriate amount of doped multi-system precious metals 4. Other active ingredients. The performance of the sensor is tested by using the static test method.

Therefore, for the formaldehyde sensor in this study, the influence of high temperatures on the sensor is a little. In the actual transportation, storage or working process of the air conditioner, the sensor can ensure the reliability of continuous operation and storage under extremely high temperatures. For the current commercial formaldehyde sensors 2#, 3#, and 4#, traditional liquid acid-base electrolytes are used as proton conduction media. Under high temperatures, the water in the electrolyte is easily lost, which leads to an increase in the system concentration. As a result, the ability of the electrolyte system to conduct protons gradually deteriorates, or even loses its ability to conduct protons. At the same time, at a long-term high temperature, it may seriously damage the reactivity of the internal catalyst material.

The above problems will eventually cause sensors 2#, 3# and 4# to be unable to resist the destructive effect of the external high-temperature environment. The sensor 1# in this study adopts a new type of electrolyte system, which is different from the current traditional electrolyte system. It has excellent thermal stability and chemical stability, and moisture can be effectively and stably confined in the electrolyte system. After treatment at a high temperature, the ability of the electrolyte system to conduct protons will not be destroyed. Therefore, compared with the current commercial sensors 2#, 3#, and 4#, the formaldehyde sensor 1# in this study has the characteristics of high-temperature resistance at 70°C, which lays the foundation for ensuring its application in the air conditioner. 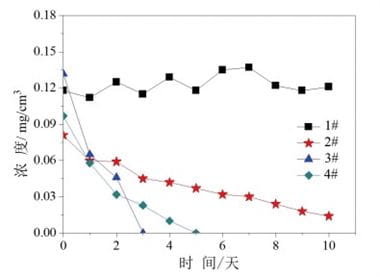 In order to verify that the sensor can resist the false detection and false alarm caused by family life, we reflect the anti-interference ability of the sensor to continuously work under the environmental conditions with interference sources by simulating the scene of drinking in a family gathering for a long time. It shows the formaldehyde concentration output result of the sensor in Figure 2; People carried out the anti-alcohol interference experiment in a user’s home with an area of 70m2, and it shows its distributions of internal layout and test point in Figure 3. 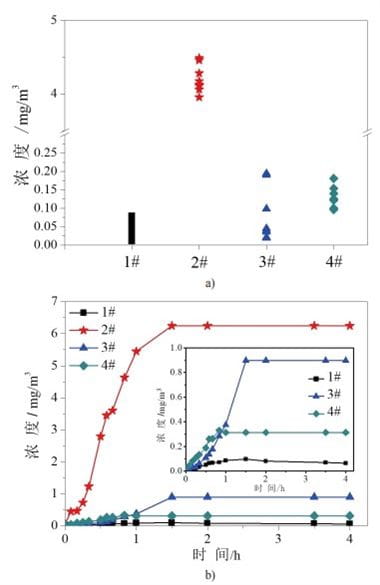 2.Figure 2 The formaldehyde concentration output of the sensor in the anti-alcohol interference experiment 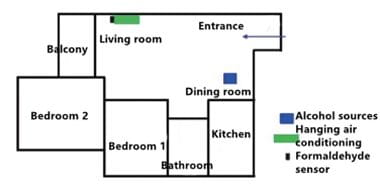 3.Figure 3 The distribution of home interior layouts and test points

Figure 2a is the output of the sensor’s anti-alcohol interference performance in an experimental chamber with an area of 30m3 by creating an environment with 10 ppm alcohol to simulate a drinking scene. Through comparison, we find that in the atmosphere of 10 ppm alcohol, the commercial formaldehyde sensor 2# is seriously bursting, and the displayed formaldehyde concentration is 4 to 5 mg/m3, far exceeding the national standard safety line of 0.1 mg/m3.

It has good resistance to alcohol interference. We can apply it to air conditioners, which will effectively reduce the probability of false detection and false alarms and improve the user experience. The highly selective active composition of the multi-precious metal system in the catalyst slurry formulation designed in this study may mainly causes the above differences in anti-interference ability. This can significantly reduce the adsorption and chemical action of alcohol molecules, thereby showing excellent anti-alcohol interference ability.

Business
What Are the Advantages of Buying Decor Items?

Business
How To Prepare Your Car For Interior Car Detailing

Life Style
How to Make Your Dissertation an Enjoyable Read